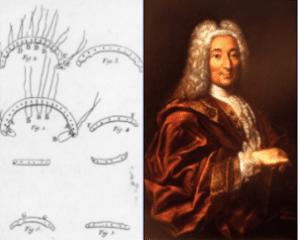 around since ancient times.  Even in ancient times, they were trying to invent devices to improve the position of teeth.  Here is a brief history of orthodontics.

The history of orthodontics starts back in ancient Greece and Rome.  Aristotle and Hippocrates had knocked around ideas for straightening teeth even as far back as 400 and 300 BC and archaeologists have proof that the Etruscan’s used appliances to maintain spaces and prevent collapse of teeth because they buried their dead wearing them.  Also, in a Roman tomb a dental device was found along with documentation on how it was used.

Pierre Fauchard, a French dentist in the 18th century who is considered the father of modern dentistry, wrote a book in 1728 about methods for straightening teeth.  He also was known to use a device called a ‘bandeau’ to widen the upper palate. A few years later in 1754 another dentist, Louis Bourdet published his own book where he suggested improvements to the bandeau.  He is also considered the first dentist to extract bicuspids to reduce tooth crowding.

It wasn’t until the 19th century that orthodontics was defined as a separate dental specialty.  The term orthodontia was first used in 1841 by Joachim Lafoulon.  In 1819 the first wire crib was used.  Also materials like precious metals, steel, gum rubber and vulcanite were used to create loops, hooks, spurs and ligatures to straighten teeth.  In addition, the first elastics for braces were used by E.J. Tucker in 1850.

Edward Angle founded the American Society of Orthodontia in 1901, which was renamed the American Association of Orthodontists in the 1930’s.  Angle also developed the first classification system for malocclusion. By the 1960’s gold was a popular material for braces.  Before the 1970’s, braces were wrapped around the teeth, but by the mid-70’s orthodontists began directly adhering the brackets to the teeth.

With all the advances in technology, the field of orthodontics has grown in leaps and bounds in the last twenty years.  We now have digital xrays and 3D dental imaging.  These produce better quality x-rays and allow orthodontists to get a more detailed look at the structure of the mouth.  Because they are digital, orthodontists can gain immediate access to the images.  Another plus is that there is less radiation exposure with these types of xrays.

There are many more options for braces today.  Metal braces adhered to the front of the teeth is still the most common treatment, but for people who are concerned about the braces being noticeable, there are other options like ceramic braces and clear aligners.

Dr. Hage knows what a big difference a straighter smile can make in a person’s life.  Not only does it help restore self-confidence, it makes it easier to practice proper oral hygiene so you have a healthy, beautiful smile for years to come.  The staff at Hage Orthodontics also understand that each person’s situation is different that’s why they take the time to sit down with you and go over all your options.  They will create the best plan for your particular needs.

Maintaining your oral health is important so everyone at Hage Orthodontics will work with you to come up with an affordable plan.  The staff is very compassionate and friendly and will always greet you with a smile.